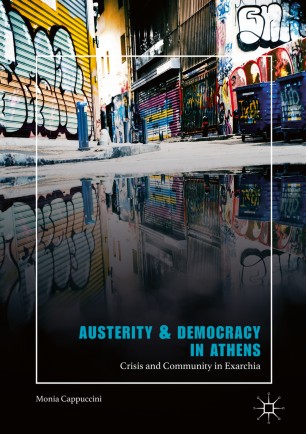 Crisis and Community in Exarchia

This book, based on an empirical form of narration, outlines a short-medium term analysis of the social impact of austerity politics on urban life.. Set in Exarchia, a radical and anti-authoritarian neighbourhood located within the city centre of Athens, Greece, this is an ethnography examining the social struggles and grassroots mobilizations that emerged locally during the crisis.
Based on over two years of fieldwork between November 2012 and early 2014, the author brings together participant observation and a period of research-action in one of Exarchia’s stekia. One particular pedestrian street is used as a case study – ‘Odos Tsamadou’ is located near Exarchia Square and here multiple social centres and political activity converge to allow the neighbourhood’s climate of solidarity and reciprocity to fully emerge.
This book is specifically targeted at academics specialized in the social sciences, ethnography, cultural anthropology and urban studies and more generally at anyone interested in contemporary urban and social development.