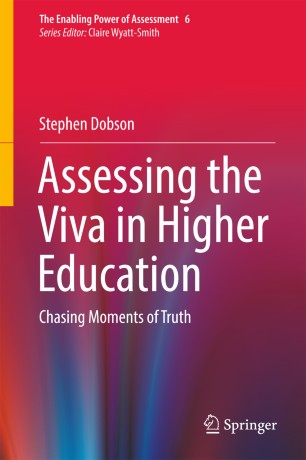 Assessing the Viva in Higher Education

Part of the The Enabling Power of Assessment book series (EPAS, volume 6)

This book makes the case for a revival in interest in the viva. As an oral assessment of a treatise or dissertation or of a student’s performance in art or dance the viva has a long history dating back to the time of the Greeks. It can be found today in the form of professional, vocational and academic vivas, where a judgment of oral performance is required to gain entry into a profession or community of scholars.

In a time when there are scandals about students selling essays to other students, the viva provides a fertile ground for probing the student to see whether they are in fact the authors of the work being assessed and know its content and how to think cognitively or otherwise.

Given that we actually know so little about the viva, the book theorises the viva based on a unique sample of vivas that have been filmed or in which the author himself has been participant, and discusses why its format is so different in Anglo-Saxon languages and Latin and other languages.

The book offers educational policy-makers and examiners a trade-off between arguments in support of the viva and the demand for other, ever more cost-effective forms of assessment as the numbers of both undergraduate and postgraduate students threaten to increase. It also argues that with demand in the labour market for qualified graduates who are better equipped with transferable skills, such as the ability to communicate complex ideas verbally in a competent, well-argued fashion and not merely through the use of rhetoric, what appear to be cost-effective forms of assessment in the short run (e.g. written exams with standardised questions or multiple choice) may actually in the long run be of less value if we are investing in a future workforce with so-called 21st century communication skills.

If the viva were abandoned, the student would be robbed of the opportunity to stage a defence.