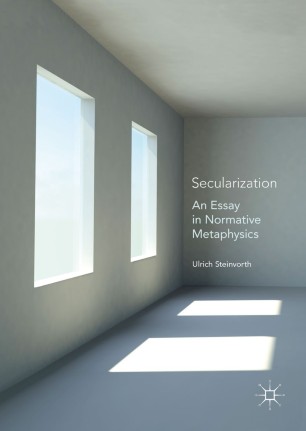 An Essay in Normative Metaphysics

This book answers questions about secularization: Does it dissolve religion, or transform it into faith in a universally valid value? Is it restricted to the west or can it occur everywhere? Using ideas of Max Weber, the book conceives secularization as a process comparable to the rational development of science and production.
What is the value secularization propagates? Sifting historical texts, Steinvorth argues the value is authenticity, to be understood as being true to one’s talents developed in activities that are done for their own sake and provide life with meaning, and as unconditionally commanded.

How can a value be unconditionally demanded? This question leads to an investigation of the self that combines Kant’s ideas on the conditions of the possibility of experience with modern brain science, and to the metaphysical deliberation whether to prefer a world with creatures able to do both good and evil to one without them.

It is not enough, however, to point to facts. We rather need to understand what secularization, religion and their possible rationality consist in. Max Weber’s sociology of religion has provided us with the conceptual means to do so, which this book develops.
Secularization is rediscovered as the same progress of rationality in the sphere of religion that we find in the development of the spheres of science, art, the economy and politics or public affairs. It proves to be the perfection rather than the dissolution of religion – a perfection that consists in recognizing authenticity as the successor of the absolute of religion.