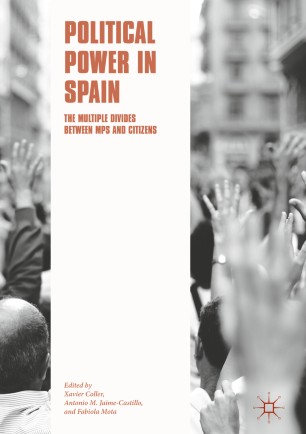 The Multiple Divides between MPs and Citizens

This book explores why some people become politicians, how they represent citizens in parliaments, and what they think about democracy and its institutions. It analyses the results of the first survey of a representative sample of Spanish MPs (580 cases) and citizens. The study covers areas such as: social profiles; recruitment and selection; women in parliaments; motivation for politics; perception of the representative function and how this is affected by corruption, disaffection and mistrust; national and regional identities; ideology; the functioning of parliamentary groups, and perceptions about the EU. The case of Spain is used to demonstrate how MPs' values, opinions and attitudes conflict and complement with those of the citizens they are supposed to represent. Through a systematic comparison between MPs and citizens, the contributions deal with topics that are key to understanding how democracies work and the role played by MPs.

Xavier Coller is Professor of Sociology at the Universidad Pablo de Olavide, Spain, and director of the research group Democracy and Autonomies: Society and Politics. He has authored over ninety works on social theories, research methods, collective identities, political elites, and complex organizations.

Antonio M. Jaime-Castillo is Associate Professor of Sociology at the Universidad de Málaga, Spain. His research interests include welfare attitudes, inequality, political sociology and quantitative methods of comparative research, and his work has been published in journals such as American Behavioral Scientist, European Sociological Review and Journal of European Social Policy.

Fabiola Mota is Associate Professor of Political Science at the Universidad Autónoma de Madrid, Spain. Previously she has taught and researched in several academic and scientific institutions in Spain where she has conducted studies and published on social capital, political participation and civil society, territorial politics and devolution.

“Spanish politics has been in constant effervescence since the indignados movement (2011) shook the basis of the party system. The explosive mix of a severe economic crisis, the austerity policies, and corruption scandals opened a vast rift between citizens and political elites negatively affecting the representative link. This rich and illuminating book sheds light on many aspects that feed the tension between the representatives and the represented. Touching upon who the national and regional MPs are, where they come from socially and politically, how they view their representative role, and how they think politics and the state should operate, this book is an excellent resource for anyone interested in understanding key aspects of political representation in Spain. Written by a young and vibrant cohort of excellent scholars, this book will be highly engaging both for readers interested in Spanish politics and for those interested in political representation and legislative studies.” (Laura Morales, Professor in Comparative Politics, Sciences Po, France)

“This extraordinary volume provides a treasure chest of fascinating findings on the attitudes, experiences and characteristics of political representatives in Spain and on their contrasts with ordinary citizens. The excellent team of volume contributors offers insightful analysis of the rich empirical results of extensive survey research. Political Power in Spain will be required reading for students of political elites, analysts of the nexus between representatives and ordinary citizens and scholars of contemporary Spain.” (Robert M. Fishman, Professor of Sociology, Carlos III University, Madrid)

“This book is a splendid example of how a classic field in between political sociology and political science, such as parliamentary studies, can be largely renewed through a solid new empirical research and a deep revision the topics that are analyzed. In addition to being exhaustive in providing a full knowledge of the field, attitudes and opinions of citizens complement the parliamentarian elite survey in building a complete picture of Spanish democracy in this domain. This book is a compulsory reading for students, scholars, and practitioners.” (Leonardo Morlino, Professor of Political Science, Luiss, Rome, Italy, and former President of the International Political Science Association)