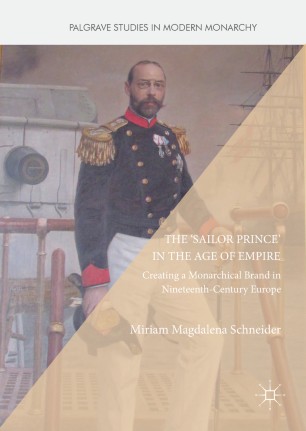 The 'Sailor Prince' in the Age of Empire

This book explores the puzzling phenomenon of the remarkable revival of monarchy in nineteenth-century Europe through a new prism: the public persona of the ‘Sailor Prince’. It highlights how four usually overlooked dynastic figures – the younger sons and brothers of monarchs such as Queen Victoria or Emperor William II – decisively helped to advertise their respective dynasties in the fiercely contested political and popular mass market, by aligning them with one of the most myth-invested cultural presences and power-political symbols of the Age of Empire: the navy. The 'Sailor Prince' in the Age of Empire traces the unusual professional careers, the adventurous empire travels and the multifaceted public representations of Prince Alfred of Britain (1844-1900), Prince Heinrich of Prussia (1862-1929), Prince Valdemar of Denmark (1858-1939) and Prince Georgios of Greece (1869-1957). Through the prism of these four personality brands, the study also investigates issues such as the role of the maritime sphere in national identity, the nature and extent of nineteenth-century monarchical modernization, the relevance of intra- and inter-imperial royal diplomacy in the Age of High Imperialism, and the curious collaboration of middle-class opinion-makers and entrepreneurs with Europe’s monarchical establishment.