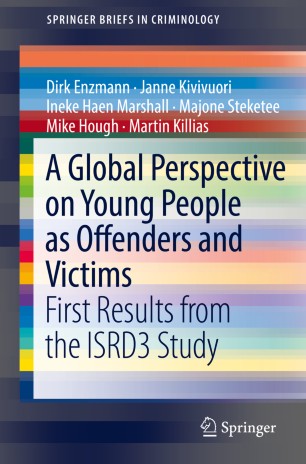 A Global Perspective on Young People as Offenders and Victims

First Results from the ISRD3 Study

This Brief presents the first major release of findings from the Third International Self-Report Delinquency Study (ISRD3). ISRD is a major international research collaboration that now covers some 35 countries. It surveys young people aged 12 to 16 in their schools, asking about their experience of crime – both as offenders and as victims – and about their attitudes to crime and justice and about their home and school life. ISRD1 was carried out in 1991-1992 and ISRD2 in 2006-2008. ISRD findings presented here cover the 27 ISRD3 countries for which data are already available, with a total sample approaching 63,000 young people. For most of these countries, the samples are drawn from two major cities.

This volume provides key findings on self-reported offending and on victimization.
Chapter 1 set the scene, and describes the background to ISRD3. Chapter 2
describes the methods used in the survey; respondents complete the ISRD questionnaire either in paper format or – increasingly – using a standardized internet program. Chapter 3 covers key findings on self-reported offending, including the important finding that preparedness to disclose offending varies according to cultural context. Chapter 4 presents findings on victimization, including important new findings on hate crime and the use of parental violence, as well as coverage of more conventional forms of crime. A final chapter summarizes the results and draws out their implications.
This Brief will be of interest to researchers in criminology and criminal justice,
as well as related fields such as sociology, public policy, and psychology. Due to
the groundbreaking methodological analyses provided, this Brief is essential reading to all who conduct or use internationally comparative and global survey research.

Janne Kivivuori is Professor of Criminology, Institute of Criminology and Legal Policy, University of Helsinki, serving as the Research Director of the Criminological Unit of the institute. His 2011 book Discovery of Hidden Crime described the history of the self-report crime survey in social science criminology. He has been active in the development of international crime indicators such as the ISRD and the European Homicide Monitor. His research interests include homicide, hate crime, and the role of media in the contemporary experience of crime.

Ineke Haen Marshall is Professor of Sociology, Criminology & Criminal Justice at Northeastern University, Boston, USA. She has published in the areas of comparative criminology, drug policy, criminal careers, minorities and crime, and cross-national methodology. She has been involved in the ISRD project from its inception and currently is the chair of the ISRD project.

Majone Steketee is chairman of the board of directors of the Verwey-Jonker Institute (The Netherlands) which conducts scientific research on social issues. She is an expert in the fields of youth (care), violence in dependent relationships and mental health and has been involved in international studies of youth crime and intergenerational transfer of domestic violence. She is Professor at the Department of Psychology, Education & Child Studies of the Social Faculty of the Erasmus University in Rotterdam.

Mike Hough is a Visiting Professor at the School of Law, Birkbeck, University of London. He founded and directed the Institute for Criminal Policy Research (ICPR) until his retirement in 2016. His research interests include: procedural justice theory; public perceptions of crime; crime measurement and crime trends; and sentencing. He was President of the British Society of Criminology from 2008 until 2011.

Martin Killias served for 25 years as Professor of Criminology and Criminal Law at the University of Lausanne. In 2006, he joined the Zurich Law Faculty and, in 2013, the St. Gallen University Law School. Martin Killias has been involved in international crime and self-report surveys as well as in comparative and experimental criminology.