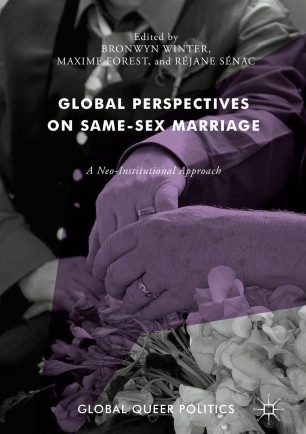 This book provides a comparative, neo-institutionalist approach to the different factors impacting state adoption of—or refusal to adopt—same-sex marriage laws. The now twenty-one countries where lesbians and gay men can legally marry include recent or longstanding democracies, republics and parliamentary monarchies, and unitary and federal states. They all reflect different positions with respect to religion and the cultural foundations of the nation. Countries opposed to such legalization, and those having taken measures in recent years to legally reinforce the heterosexual fundaments of marriage, present a similar diversity. This diversity, in a globalized context where the idea of same-sex marriage has become integral to claims for LGBTI equality and indeed LGBTI human rights, gives rise to the following question: which factors contribute to institutionalizing same-sex marriage?

nalism. Through three neo-institutionalist lenses—historical, sociological and discursive—contributors investigate two aspects of the processes of adoption or opposition of equal recognition of same-sex partnerships. Firstly, they reveal how claims by LGBTIQ movements are being framed politically and brought to parliamentary politics. Secondly, they explore the ways in which same-sex marriage becomes institutionalized (or resisted) through legal and societal norms and practices. Although it adopts neo-institutionalism as its main theoretical framework, the book incorporates a broad range of perspectives, including scholarship on social movements, LGBTI rights, heterosexuality and social norms, and gender and politics.

Bronwyn Winter is Deputy Director of the European Studies program at the University of Sydney, Australia, where she also contributes to the International and Global Studies program.