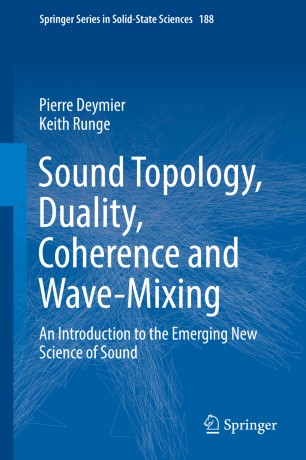 An Introduction to the Emerging New Science of Sound

This book offers an essential introduction to the notions of sound wave topology, duality, coherence and wave-mixing, which constitute the emerging new science of sound. It includes general principles and specific examples that illuminate new non-conventional forms of sound (sound topology), unconventional quantum-like behavior of phonons (duality), radical linear and nonlinear phenomena associated with loss and its control (coherence), and exquisite effects that emerge from the interaction of sound with other physical and biological waves (wave mixing).

The book provides the reader with the foundations needed to master these complex notions through simple yet meaningful examples. General principles for unraveling and describing the topology of acoustic wave functions in the space of their Eigen values are presented. These principles are then applied to uncover intrinsic and extrinsic approaches to achieving non-conventional topologies by breaking the time revers

al symmetry of acoustic waves. Symmetry breaking can impart topological immunity to wave degradation from imperfection scattering and catalyze controlled coherence. In the intrinsic case and the phonon representation of acoustic waves, the self-interaction/interference of a wave through its supporting medium exposes the notion of duality in the quantum statistics (i.e. boson vs. fermion characterized by the symmetry of multiple particle states) and how the quantum analogue behaviors of sound can be exploited in the form of novel sound-based information transfer and processing devices. By considering media that mix different types of waves, the book addresses the interaction of sound with other physical and biological waves but also brings to light examples of extrinsic processes that can lead to symmetry breaking. The coherent conversion of sound into other types of waves as well as the sound-induced non-conventional topology of elastic, electronic, spin and biological waves are presented in the case of media exhibiting elasto-electronic, photo-elastic, magneto-elastic effects and biological mechano-transduction.

Pierre Deymier is a pioneer in the field of phononics and acoustic metamaterials as well as the broad area of materials theory, modelling and simulation. He is the editor of two recent Springer books on “Acoustic Metamaterials and Phononic Crystals” and “Multiscale Paradigms in Integrated Computational Materials Science and Engineering.”  He is the author or co-author or more than 200 publications in the fields of phononics, computational materials science and engineering, biomedical engineering and nanotechnology.

Keith Runge is a theoretical and computational physicist with extensive experience in modelling of non-linear systems. He has published over 70 refereed journal articles. His research interests include computational chemistry, theoretical materials science, quantum physics as well as biophysics. He is the co-editor of the Springer book entitled “Multiscale Paradigms in Integrated Computational Materials Science and Engineering.”