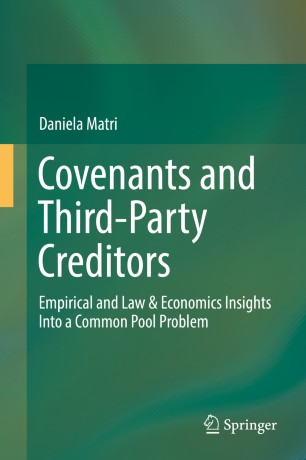 Empirical and Law & Economics Insights Into a Common Pool Problem

This book adds to the debate on the effects of covenants on third-party creditors (externalities), which have recently become a focus of discussion in the contexts of bankruptcy law, corporate law and corporate governance. The general thrust of the debate is that negative effects on third-party creditors predominate because banks act in their own self-interest.
After systematising the debated potential positive and negative externalities of covenants, the book empirically examines these externalities: It investigates the banks’ factual conduct and its effects on third-party creditors in Germany and the US. The study’s most significant outcome is that it disproves the assumption that banks disregard third-party creditors’ interests.
These findings are then interpreted with the tools of economic analysis; particularly, with the concept of common pool resources (CPRs). Around the aggregated value of the debtor company’s asset pool (as CPR) exists an n-person prisoner’s dilemma between banks and third-party creditors: No creditor knows when and under what conditions the other creditor will appropriate funds from the debtor company’s asset pool. This coordination problem is traditionally addressed by means of bankruptcy law and collaterals. However, the incentive structure that surrounds the bilateral private governance system created by covenants and an event of default clause (a CPR private governance system) is found to also be capable of tackling this problem.
Moreover, the interaction between the different regulation spheres – bankruptcy law, collateral and the CPR private governance system − has important implications for both the aforementioned discussions as well as the legal treatment of covenants and event of default clauses. Covenants alone cannot be seen as an alternative to institutional regulation; the complete CPR private governance system and its interaction with institutional regulation must also be taken into consideration. In addition, their function must first find more acceptance and respect in the legal treatment of covenants and event of default clauses: The CPR private governance system fills a gap in the regulation of the tragedy of the commons by bankruptcy law and collateral. This has particularly important implications for the German § 138 BGB, § 826 BGB and ad hoc duties to disclose insider information.