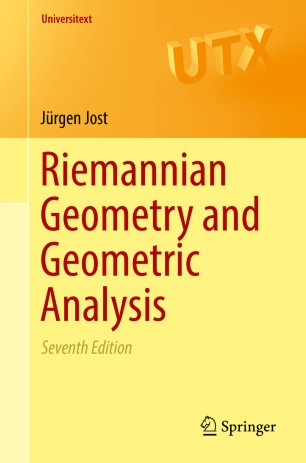 This established reference work continues to provide its readers with a gateway to some of the most interesting developments in contemporary geometry. It offers insight into a wide range of topics, including fundamental concepts of Riemannian geometry, such as geodesics, connections and curvature; the basic models and tools of geometric analysis, such as harmonic functions, forms, mappings, eigenvalues, the Dirac operator and the heat flow method; as well as the most important variational principles of theoretical physics, such as Yang-Mills, Ginzburg-Landau or the nonlinear sigma model of quantum field theory. The present volume connects all these topics in a systematic geometric framework. At the same time, it equips the reader with the working tools of the field and enables her or him to delve into geometric research.
The 7th edition has been systematically reorganized and updated. Almost no page has been left unchanged. It also includes new material, for instance on symplectic geometry, as well as the Bishop-Gromov volume growth theorem which elucidates the geometric role of Ricci curvature.
From the reviews:
“This book provides a very readable introduction to Riemannian geometry and geometric analysis... With the vast development of the mathematical subject of geometric analysis, the present textbook is most welcome.” Mathematical Reviews
“For readers familiar with the basics of differential geometry and some acquaintance with modern analysis, the book is reasonably self-contained … The book succeeds very well in laying out the foundations of modern Riemannian geometry and geometric analysis. It introduces a number of key techniques and provides a representative overview of the field.” Monatshefte für Mathematik

“The present volume ends with two appendices (on linear elliptic partial differential equations and topological results about fundamental groups and covering spaces) and a rich bibliography of 454 items, including some classical books and papers. All the material, written in a clear and precise style, is carefully developed, many examples supporting the understanding. In the reviewer’s opinion, this is an excellent book, a very useful addition to any good library.” (Gabriel Eduard Vilcu, zbMATH 1380.53001, 2018)
Buy options