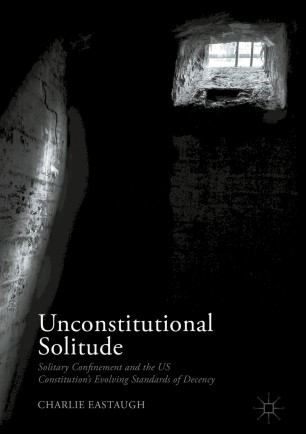 Solitary Confinement and the US Constitution’s Evolving Standards of Decency

This book examines American solitary confinement – in which around 100,000 prisoners are held at any one time – and argues that under a moral reading of individual rights such punishment is not only a matter of public interest, but requires close constitutional scrutiny. While Eighth Amendment precedent has otherwise experienced a generational fixation on the death penalty, this book argues that such scrutiny must be extended to the hidden corners of the US prison system.
Despite significant reforms to capital sentencing by the executive and legislative branches, Eastaugh shows how the American prison system as a whole has escaped meaningful judicial oversight. Drawing on a wide range of socio-political contexts in order to breathe meaning into the moral principles underlying the punishments clause, the study includes an extensive review of professional (medico-legal) consensus and comparative transnational human rights standards united against prolonged solitary confinement. Ultimately, Eastaugh argues that this practice is unconstitutional. An informed and empowering text, this book will be of particular interest to scholars of law, punishment, and the criminal justice system.