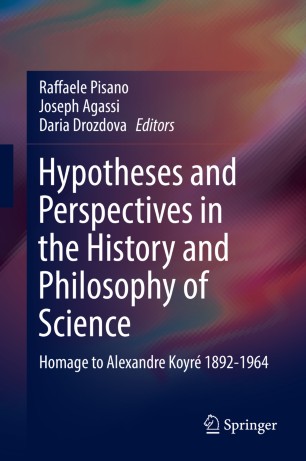 Hypotheses and Perspectives in the History and Philosophy of Science

To commemorate the 50th anniversary of his passing (in 2014), this special book features studies on Alexandre Koyré (1892–1964), one of the most influential historians of science of the 20th century, who re-evaluated prevalent thinking on the history and philosophy of science. In particular, it explores Koyré’s intellectual matrix and heritage within interdisciplinary fields of historical, epistemological and philosophical scientific thought. Koyré is rightly noted as both a versatile historian on the birth and development of modern science and for his interest in philosophical questions on the nature of scientific knowledge. In the 1940s and 1950s his activities in the United States established a crucial bridge between the European historical tradition of science studies and the American academic environments, and an entire generation of historians of science grew up under his direct influence. The book brings together contributions from leading experts in the field, and offers much-needed insights into the subject from historical, nature of science, and philosophical perspectives. It provides an absorbing and revealing read for historians, philosophers and scientists alike.