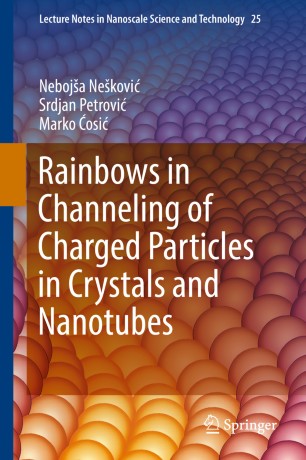 Rainbows in Channeling of Charged Particles in Crystals and Nanotubes

This book discusses the effects, modeling, latest results, and nanotechnology applications of rainbows that appear during channeling of charged particles in crystals and nanotubes. The authors begin with a brief review of the optical and particle rainbow effects followed by a detailed description of crystal rainbows, which appear in ion channeling in crystals, and their modeling using catastrophe theory. The effects of spatial and angular focusing of channeled ions are described, with special attention given to the applications of the former effect to subatomic microscopy. The results of a thorough study of the recent high-resolution channeling experiments performed with protons of energies between 2.0 and 0.7 MeV and a 55 nm thick silicon crystal are also provided. This study opens up the potential for accurate analysis of very thin crystals. Also presented are recent results related to rainbows occurring in proton transmission through carbon nanotubes, and a detailed quantum consideration of the transmission of positrons of an energy of 1 MeV through very short carbon nanotubes. This process is determined by the rainbow effect. The initial positron beam is represented as an ensemble of non-interacting Gaussian wave packets, and the principal and supernumerary primary rainbows appearing in the spatial and angular distributions of transmitted positrons are clearly identified. They are explained by the effects of wrinkling, concentration and coordination of the wave packets.