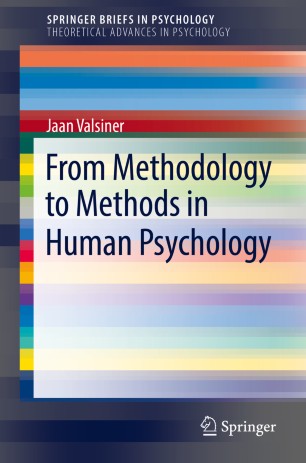 From Methodology to Methods in Human Psychology

This Brief aims to provide a theoretically innovative introduction to the methodology of the human sciences. It presents a new version of methodology, as a system of mutually linked acts of creating knowledge where both abstract and concrete features of research are intricately intertwined. It shows how the constructions of particular methods that are used in the science of psychology are interdependent with general psychology. This is exemplified as the Methodology Cycle. The need for an emphasis on the Methodology Cycle grows out of the habitual presentation of methods as if they were independent from the assumptions which they are built upon, with the ultimate goal of searching for and creating universal principles. Chapters discuss the Methodology Cycle and its uses in various areas of empirical study in psychological functions.

Featured topics in this Brief include:

From Methodology to Methods in Human Psychology will be of interest to psychologists, undergraduate and graduate students, and researchers.

Jaan Valsiner is Niels Bohr Professor of Cultural Psychology at Aalborg University, Denmark. He is the founding editor (1995) of the Sage journal, Culture & Psychology.  And of The Oxford Handbook of Culture and Psychology (2012). He is also the Editor-in-Chief of Integrative Psychological and Behavioral Sciences  (Springer, from 2007) and the Springer Briefs seriesTheoretical Advances in Psychology. In 1995 he was awarded the Alexander von Humboldt Prize in Germany for his interdisciplinary work on human development, and Senior Fulbright Lecturing Award in Brazil 1995-1997. He is the winner of the Hans-Kilian-Award of 2017 for his interdisciplinary work uniting social sciences.  He has been a visiting professor in Brazil, Japan, Australia, Estonia. Germany, Italy, United Kingdom, Norway, Luxembourg and the Netherlands.