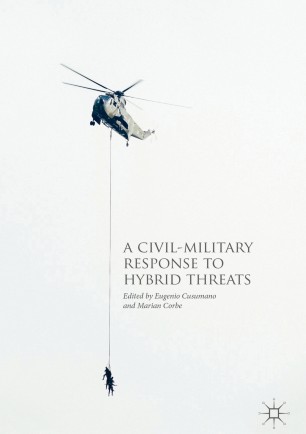 A Civil-Military Response to Hybrid Threats

This edited volume provides scholars and practitioners with an in-depth examination of the role of civil-military cooperation in addressing hybrid threats. As they combine the simultaneous employment of conventional and non-conventional tools and target not only military objectives but governments and societies at large, hybrid threats cannot be countered solely by military means, but require an equally inclusive response encompassing a wide range of military and civilian actors.

This book, which combines the perspectives of academics, military officers, and officials from international and non-governmental organisations, resorts to different case studies to illustrate the importance of civil-military cooperation in enhancing the resilience of NATO members and partners against a wide range of societal destabilization strategies, thereby contributing to the formulation of a civil-military response to hybrid threats.

Eugenio Cusumano is an Assistant Professor of International Relations at the University of Leiden, the Netherlands. His research, published in leading security studies journals, concentrates on the role of non-state actors in military operations and humanitarian crises both on land and at sea.

Marian Corbe is the Academic Advisor at NATO’s Civil-Military Cooperation Centre of Excellence in The Hague, The Netherlands, and an officer of the German Armed Forces. His current work focuses on aligning academic research and education with military demands in the area of civil-military cooperation.

“Clear and well structured, the book achieves its aim. It will definitely become a reference point for those studying civil-military cooperation approaches to counter societal destabilisation. Given the common challenge of building societal resilience, the book is a call for academics and practitioners to further theoretical sophistication and empirical richness: together they are recognised as the only ways to avoid excessive complexity or vagueness in dealing with hybrid threats and hybrid warfare.” (Giuseppe Fersini, The International Spectator, Vol. 53 (3), 2018)
Buy options