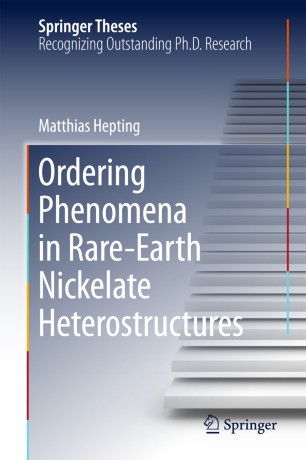 This thesis presents an experimental study of ordering phenomena in rare-earth nickelate-based heterostructures by means of inelastic Raman light scattering and elastic resonant x-ray scattering (RXS). Further, it demonstrates that the amplitude ratio of magnetic moments at neighboring nickel sites can be accurately determined by RXS in combination with a correlated double cluster model, and controlled experimentally through structural pinning of the oxygen positions in the crystal lattice. The two key outcomes of the thesis are: (a) demonstratingfull control over the charge/bond and spin order parameters in specifically designed praseodymium nickelate heterostructures and observation of a novel spin density wave phase in absence of the charge/bond order parameter, which confirms theoretical predictions of a spin density wave phase driven by spatial confinement of the conduction electrons; and (b) assessing the thickness-induced crossover between collinear and non-collinear spin structures in neodymium nickelate slabs, which is correctly predicted by drawing on density functional theory.