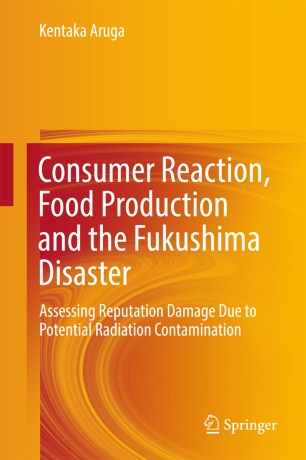 This book examines the factors involved in consumer responses to food produced in regions near the Fukushima Daiichi Nuclear Plant following the March 2011 Eastern Japanese earthquake, and assesses how responses to reports on food safety and risk of radiation contamination shaped consumer perceptions of and subsequent behavior toward products from the Fukushima prefecture. On the basis of a survey conducted in 2014 among 8,000 consumers from all parts of Japan and focusing on ten food products (rice, cucumbers, apples, shiitake mushrooms, beef, pork, eggs, tuna fish, wakame seaweed, and mineral water) it investigates consumer choices specifically based on rumor (“fuyou”) and not fact as well as how “fuyou” damage shaped such choices. It then goes on to analyze the differences between these customer choices.

Kentaka Aruga is an environmental and natural resource economist, with a PhD from the Department of Environmental and Natural Resource Economics at the University of Rhode Island. He was an associate professor at the Ishikawa Prefectural University from 2012-2016 and is appointed at the Graduate School of Humanities and Social Sciences, Saitama University, Japan as an associate professor. He has been conducting research on various commodity markets such as corn, soybeans, seafood, gold, silver, copper, and energy. He currently works on consumer reaction and behavior toward food products that have potential risk of nuclear contamination.