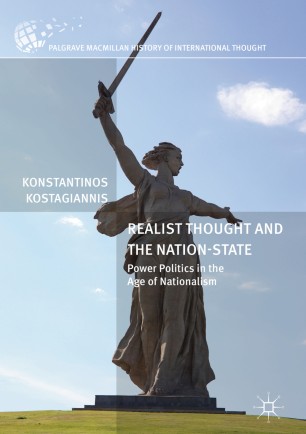 Realist Thought and the Nation-State

Power Politics in the Age of Nationalism

This book recovers the history of realist theorization on nationalism and the nation-state. Presented in a sequence of snapshots and illustrated by examples drawn from the foreign policy of great powers, this history is represented by four key realist thinkers. It uses the centrality of power in realism as a starting point to claim, contrary to conventional wisdom about realism, that for realists the state is better understood not as a political unit outside history but rather as a manifestation of power unfixed in time. It also claims that the process of gradual impoverishment of the concept of power from classical to structural realism had profound implications for realism, as what the latter gained in parsimony it lost in analytical purchase. As a result, elaborate understandings of nationalism and its relation to the state are replaced by one-dimensional approaches. In order to offer meaningful engagement with foreign policy, neorealists often have to resort to the recovery of some of the complexity of classical realist accounts.

“The rise of  nativist populism over the past few years forces us all to ask critical questions about the  growing appeal of nationalism in a world  now so obviously under stress. In this carefully argued study the author does an outstanding job in explaining why  realist conceptions of the nation-state  are so well adapted for helping us understand  the dangerous era into which we are now heading. An important work on a vital topic.” (Michael Cox, Director, LSE IDEAS)

“Konstantinos Kostagiannis has made a valuable contribution to the  burgeoning debate about realist international thought. Through subtle, historically-sensitive readings of some of the most prominent thinkers in the tradition – E. H. Carr, Hans Morgenthau, John Herz and John Mearsheimer – he demonstrates the conflicting ways in which realists have conceptualised power and the nation-state, and he makes a lucid case for the potential of Carr’s approach and the limitations of more recent realist visions. This book will be of interest to both historians of international thought and IR theorists.” (Duncan Bell, University of Cambridge)