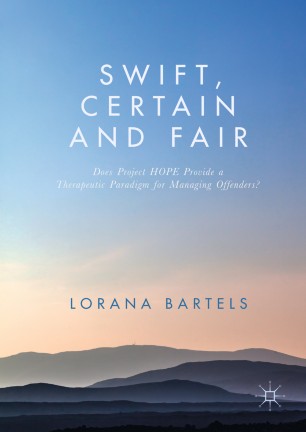 Does Project HOPE Provide a Therapeutic Paradigm for Managing Offenders?

This book presents a detailed analysis of Hawaii’s Opportunity Probation with Enforcement (HOPE) program. Developed by Judge Steven Alm in Hawaii in 2004, this model of ‘swift, certain and fair’ justice has been widely adopted across the United States. The book argues that although HOPE has principally been viewed in terms of its deterrent impact, it is in fact best understood through the lens of therapeutic jurisprudence and solution-focused courts, especially drug courts. Bartels presents a detailed overview of HOPE’s operation, as well as a critical assessment of the evaluation findings of HOPE and other programs based on this model.
Crucially, the book draws on observational research to demonstrate that much of the commentary on HOPE has been based on misunderstandings about the program, and Bartels ultimately provides much-needed in-depth analysis of critiques of the HOPE model. A rigorous study which concludes by identifying key issues for jurisdictions considering implementing the model and areas for future research, this book will be of special interest to scholars of criminal justice, recidivism and drug-related issues.