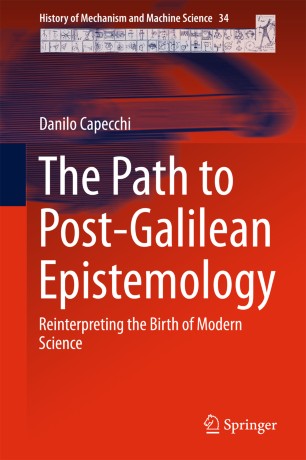 The Path to Post-Galilean Epistemology

Reinterpreting the Birth of Modern Science

Part of the History of Mechanism and Machine Science book series (HMMS, volume 34)

This book casts new light on the process that in the sixteenth and seventeenth centuries led to a profound transformation in the study of nature with the emergence of mechanistic philosophy, the new mixed mathematics, and the establishment of the experimental approach. It is argued that modern European science originated from Hellenistic mathematics not so much because of rediscovery of the latter but rather because its “applied” components, namely mechanics, optics, harmonics, and astronomy, and their methodologies continued to be transmitted throughout the Middle Ages without serious interruption. Furthermore, it is proposed that these “applied” components played a role in their entirety; thus, for example, “new” mechanics derived not only from “old” mechanics but also from harmonics, optics, and astronomy. Unlike other texts on the subject, the role of mathematicians is stressed over that of philosophers of nature and the focus is particularly on epistemological aspects. In exploring Galilean and post-Galilean epistemology, attention is paid to the contributions of Galileo’s disciples and also the impact of his enemies. The book will appeal to both historians of science and scientists.