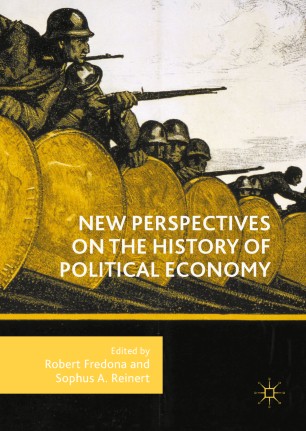 New Perspectives on the History of Political Economy

This volume offers a snapshot of the resurgent historiography of political economy in the wake of the ongoing global financial crisis, and suggests fruitful new agendas for research on the political-economic nexus as it has developed in the Western world since the end of the Middle Ages. New Perspectives on the History of Political Economy brings together a select group of young and established scholars from a wide variety of disciplinary backgrounds—history, economics, law, and political science—in an effort to begin a re-conceptualization of the origins and history of political economy through a variety of still largely distinct but complementary historical approaches—legal and intellectual, literary and philosophical, political and economic—and from a variety of related perspectives: debt and state finance, tariffs and tax policy, the encouragement and discouragement of trade, merchant communities and companies, smuggling and illicit trades, mercantile and colonial systems, economic cultures, and the history of economic doctrines more narrowly construed.

The first decade of the twenty-first century, bookended by 9/11 and a global financial crisis, witnessed the clamorous and urgent return of both 'the political' and 'the economic' to historiographical debates. It is becoming more important than ever to rethink the historical role of politics (and, indeed, of government) in business, economic production, distribution, and exchange. The artefacts of pre-modern and modern political economy, from the fourteenth through the twentieth centuries, remain monuments of perennial importance for understanding how human beings grappled with and overcame material hardship, organized their political and economic communities, won great wealth and lost it, conquered and were conquered. The present volume, assembling some of the brightest lights in the field, eloquently testifies to the rich and powerful lessons to be had from such a historical understanding of political economy and of power in an economic age.