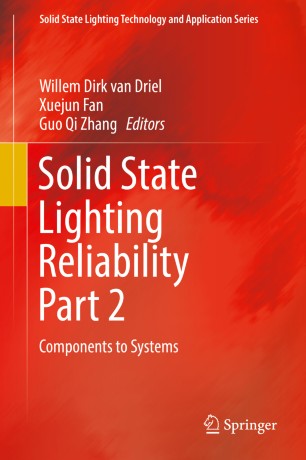 In the past four years we have witnessed rapid development in technology and significant market penetration in many applications for LED systems. New processes and new materials have been introduced; new standards and new testing methods have been developed; new driver, control and sensing technologies have been integrated; and new and unknown failure modes have also been presented. In this book, Solid State Lighting Reliability Part 2, we invited the experts from industry and academia to present the latest developments and findings in the LED system reliability arena. Topics in this book cover the early failures and critical steps in LED manufacturing; advances in reliability testing and standards; quality of colour and colour stability; degradation of optical materials and the associated chromaticity maintenance; characterization of thermal interfaces; LED solder joint testing and prediction; common failure modes in LED drivers; root causes for lumen depreciation; corrosion sensitivity of LED packages; reliability management for automotive LEDs, and lightning effects on LEDs.

This book is a continuation of Solid State Lighting Reliability: Components to Systems (published in 2013), which covers reliability aspects ranging from the LED to the total luminaire or system of luminaires. Together, these two books are a full set of reference books for Solid State Lighting reliability from the performance of the (sub-) components to the total system, regardless its complexity.