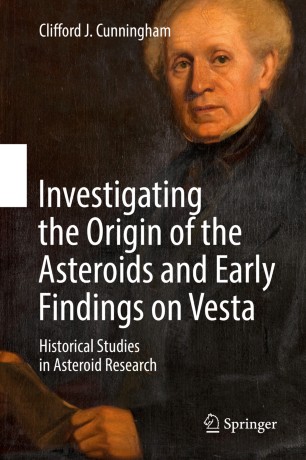 Investigating the Origin of the Asteroids and Early Findings on Vesta

This book assesses the origin of asteroids by analyzing the discovery of Vesta in 1807. Wilhelm Olbers, who discovered Vesta, suggested that the asteroids were the result of a primordial planet’s explosion. Cunningham studies that idea in detail through the writings of Sir David Brewster in Scotland, the era's most prolific writer about the asteroids. He also examines the link between meteorites and asteroids, revealing a synergy between Ernst Chladni, Romantic symbolism, and the music of the spheres.

Vesta was a lightning rod for controversy throughout the nineteenth century with observers arguing over its size and color, and the astounding notion that it was self-luminous. It was also a major force for change, as new methods in the field of celestial mechanics were developed to study the orbital perturbations it is subject to. A large selection of private correspondence and scientific papers complete the first comprehensive historical study of Vesta ever published.

With a synoptic look at the four asteroids, Ceres, Pallas, Juno and Vesta, Cunningham provides a valuable resource on asteroid origins and explains how they were integrated into the newly revealed solar system of the early nineteenth century.