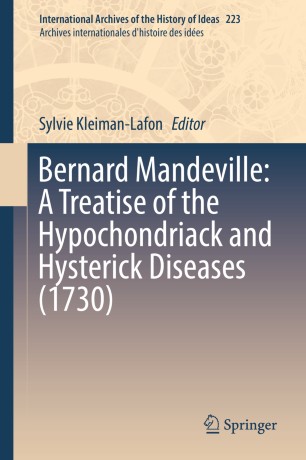 Bernard Mandeville: A Treatise of the Hypochondriack and Hysterick Diseases (1730)

This work reflects on hypochondria as well as on the global functioning of the human mind and on the place of the patient/physician relationship in the wider organisation of society. First published in 1711, revised and enlarged in 1730, and now edited and published with a critical apparatus for the first time, this is a major work in the history of medical literature as well as a complex literary creation. Composed of three dialogues between a physician and two of his patients, Mandeville’s Treatise mirrors the digressive structure of a talking cure. Thanks to the soothing and enlightening effects of this casual conversation, the physician Mandeville demonstrates the healing power of words for a class of patients that he presents as men of learning who need above all to be addressed in their own language. Mandeville’s aim was to delineate his own cure for hypochondria and hysteria, which consisted of a talking cure followed by diet and exercise, but also to discuss the practice of medicine in England and continental Europe at a time when physicians were beginning to lose ground to apothecaries. Opposing a purely theoretical approach to medicine, Mandeville takes up the principles presented by Francis Bacon, Thomas Sydenham, and Giorgio Baglivi, and advocates a medical practice based on experience and backed up by time-tested theories.