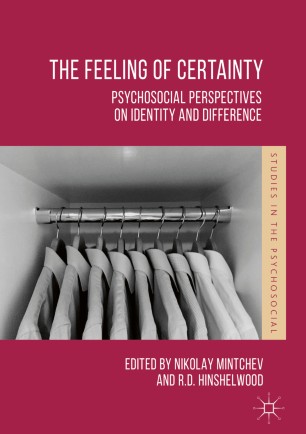 The Feeling of Certainty

Psychosocial Perspectives on Identity and Difference

This book explores the concept of certainty, a term which is widely used in everyday language to designate a psychological experience or feeling but is rarely considered controversial or politically charged. The Feeling of Certainty argues that conversely this most ordinary of feelings plays a key role in shaping identity formation, social exclusion, prejudice, and commitment to political causes. The authors question what it means for the subject to feel certainty about her or his relationships to self and others. From where does the feeling of certainty originate, and how does it differ from modes of thought that are open to scepticism about the order of things? They draw on a wide range of theories, including those of Freud, Klein, Lacan, Wittgenstein, Bion, and Jung, challenging readers to consider the world of ideologies, symbols, and stereotypes in which certainty is entrenched, as well as the inter- and intra-psychic processes and defence mechanisms which form the unconscious foundation of the experience of certainty. This collection will offer valuable insight to scholars of psychology, politics, social science and history.