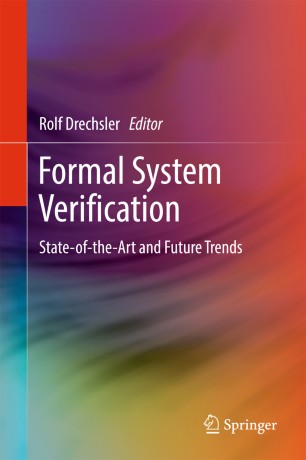 This book provides readers with a comprehensive introduction to the formal verification of hardware and software. World-leading experts from the domain of formal proof techniques show the latest developments starting from electronic system level (ESL) descriptions down to the register transfer level (RTL). The authors demonstrate at different abstraction layers how formal methods can help to ensure functional correctness. Coverage includes the latest academic research results, as well as descriptions of industrial tools and case studies.

Rolf Drechsler is head of Cyber-Physical Systems department at the German Research Center for Artificial Intelligence (DFKI) since 2011. Furthermore, he is a Full Professor at the Institute of Computer Science, University of Bremen, since 2001. Before, he worked for the Corporate Technology Department of Siemens AG, and was with the Institute of Computer Science, Albert-Ludwig University of Freiburg/Breisgau, Germany. Rolf Drechsler received the Diploma and Dr. Phil. Nat. degrees in computer science from the Goethe-University in Frankfurt/Main, Germany, in 1992 and, respectively, 1995. Rolf Drechsler focusses in his research at DFKI and in the Group for Computer Architecture, which he is heading at the Institute of Computer Science of the University of Bremen, on the development and design of data structures and algorithms with an emphasis on circuit and system design. Rolf Drechsler has been and still is a member of the Program Committees of numerous conferences (including e.g. DAC, ICCAD, DATE, ASP-DAC, FDL, MEMOCODE, FMCAD) and is co-founder of the Graduate School of Embedded Systems which started in 2006. Since 2012, he additionally coordinates the Graduate School System Design. He has received Best Paper Awards from numerous international scientific conferences, e.g.: Haifa Verification Conference (HVC) 2006, Forum on Specification & Design Languages (FDL) 2007 and 2010, IEEE Symposium on Design and Diagnostics of Electronic Circuits and Systems (DDECS) 2010, IEEE/ACM International Conference on Computer-Aided Design (ICCAD) 2013.