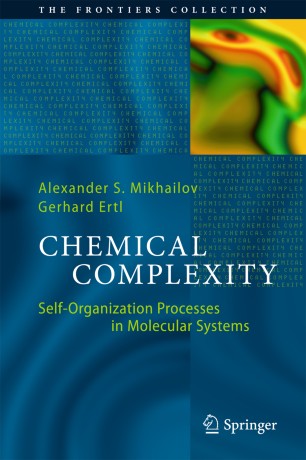 This book provides an outline of theoretical concepts and their experimental verification in studies of self-organization phenomena in chemical systems, as they emerged in the mid-20th century and have evolved since. Presenting essays on selected topics, it was prepared by authors who have made profound contributions to the field.

Traditionally, physical chemistry has been concerned with interactions between atoms and molecules that produce a variety of equilibrium structures - or the 'dead' order - in a stationary state. But biological cells exhibit a different 'living' kind of order, prompting E. Schrödinger to pose his famous question “What is life?” in 1943.  Through an unprecedented theoretical and experimental development, it was later revealed that biological self-organization phenomena are in complete agreement with the laws of physics, once they are applied to a special class of thermodynamically open systems and non-equilibrium states. This knowledge has in turn led to the design and synthesis of simple inorganic systems capable of self-organization effects. These artificial 'living organisms' are able to operate on macroscopic to microscopic scales, even down to single-molecule machines.

In the future, such research could provide a basis for a technological breakthrough, comparable in its impact with the invention of lasers and semiconductors. Its results can be used to control natural chemical processes, and to design artificial complex chemical processes with various functionalities.  The book offers an extensive discussion of the history of research on complex chemical systems and its future prospects.

Gerhard Ertl received the Nobel Prize in Chemistry in 2007 for his studies on heterogeneous catalysis and self-organization processes in surface chemical reactions.  He was the director of the Physical Chemistry department at the Fritz Haber Institute of the Max Planck Society in Berlin, where he is currently a Professor Emeritus. Prof. Alexander S. Mikhailov, of the same institute, is a theoretical physicist who has been working with G. Ertl for more than twenty years. He is the author of three monographs published by Springer and was awarded the International Solvay Chair in Chemistry in 2009. Together, the authors initiated and organized a series of international conferences on "Engineering of Chemical Complexity".