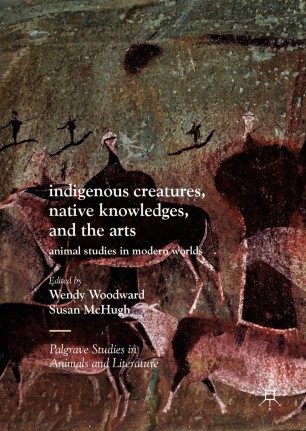 ‘Traditionally, important books concerning  animals report scientific views.  Indigenous Creatures, Native Knowledge, and the Arts is an important book concerning animals that reports artistic views held by a wide array of people from a variety of cultures. Considering that art was the method used by the earliest members of our species to represent animals, this says a great deal about us and our biophilic views. It’s fascinating, and no wonder, as we all have some desire to connect with other species, and we can rely on this book, which is written with scholarly care.’
— Elizabeth Marshall Thomas, author of The Harmless People, The Hidden Life of Dogs, and The Animal Wife, USA
This volume illuminates how creative representations remain sites of ongoing struggles to engage with animals in indigenous epistemologies. Traditionally imagined in relation to spiritual realms and the occult, animals have always been more than primitive symbols of human relations. Whether as animist gods, familiars, conduits to ancestors, totems, talismans, or co-creators of multispecies cosmologies, animals act as vital players in the lives of cultures. From early days in colonial contact zones through contemporary expressions in art, film, and literature, the volume’s unique emphasis on Southern Africa and North America – historical loci of the greatest ranges of species and linguistic diversity – help to situate how indigenous knowledges of human-animal relations are being adapted to modern conditions of life shared across species lines.

Wendy Woodward is the author of The Animal Gaze: Animal Subjectivities in Southern African Narratives (2008). She co-edited a special issue of Journal of Literary Studies entitled Figuring the Animal in Post-apartheid South Africa (2014) and has published three volumes of poetry.

Susan McHugh is the author of Animal Stories: Narrating across Species Lines (2011) as well as Dog (2004). She co-edited The Routledge Handbook of Human-Animal Studies (2014), and Literary Animals Look, a special issue of Antennae: The Journal of Nature in Visual Culture (2013).