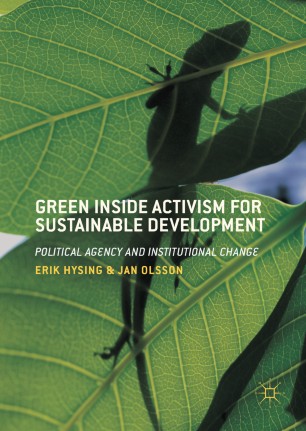 Green Inside Activism for Sustainable Development

This book considers how public sector institutions can be transformed to better support sustainable development by exploring the concept of green inside activism and its importance for institutional change. The phenomenon of inside activism has been shown to be crucial for green policy change and this book focuses on public officials as green inside activists, committed to green values and engaged in social movement, acting strategically from inside public administration to change public policy and institutions in line with such value commitment. The book theorizes how green inside activism can contribute to a more sustainable development through institutional change. This theorizing builds on and relates to highly relevant theoretical arguments in the existing literature. The authors also consider the legitimacy of inside activism and how it can be reconciled with democratic ideals. This innovative work will appeal to students and scholars of public policy, political science and environmental politics.

“By looking at the way environmentalists push for their cause inside the bureaucracy, Hysing and Olsson break open the black box of the state, shedding light on its inter-workings, or rather on the persistent and unglamorous work of the humans we call bureaucrats. The authors paint a colorful picture of the everyday strategies of rational and emotional – combative and adaptive – government officials who struggle for green causes. The implications go far beyond environmentalism:  the bureaucracy is inhabited by people who may be committed to a variety of different political and social causes. Their actions are incremental, but cumulative, and can have a transformative affect not just on policy but on state institutions more generally. In its depth, creativity and clarity, this study provides an important contribution not just to studies of the bureaucracy, but of human action in general.” (Rebecca Neaera Abers, Professor of Political Science, Institute of Political Science, University of Brasilia, Brazil)

“Institutional theory is often criticized for having difficulty in explaining change. Erik Hysing and Jan Olsson have provided an important contribution to the literature by examining the role of activists within institutions as change agents. This book links their theoretical insights with careful empirical work to advance significantly the study of institutions and institutional change.” (B. Guy Peters, Maurice Falk Professor of Government, Department of Political Science, University of Pittsburgh, USA)