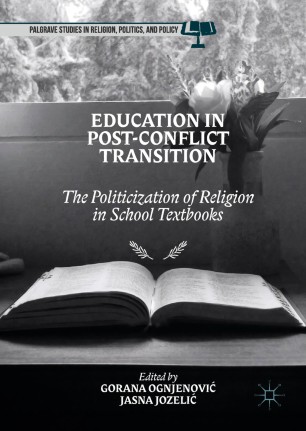 The Politicization of Religion in School Textbooks

This book offers vivid insights into policies of religious education in schools since the series of wars in former Yugoslavia in the 1990's. It traces the segregation among members of different ethnic groups in Slovenia, Bosnia-Herzegovina, Croatia, and Serbia, which has never been greater or more systematic.  It aims to be a necessary step in understanding the origins of this systematic segregation and how it is reproduced in educational practice, asserting that the politicization of religion in the school textbooks is one of the motors responsible for the ongoing ethnic segregation. It also deals with complex aspects of this issue, such as the general situation of religion in the different countries, the social position of churches, the issues of gender, the reconciliation after the Yugoslav Wars, and the integration of the EU.

“This is an important and timely book, describing and discussing the role of religion in school education within most of the successor states of the former Socialist Federal Republic of Yugoslavia. It provides important insights into the ways by which religions are sought to be used in molding ethnic and cultural identities. The book documents and discusses the transitions from an almost absolutistic secularism of the former federal republic in the early post- World War II, to a process where churches and religious communities have now come to play dominant roles within the separate successor states, including through the religious education in schools. It will be an important source for contemporary discussions of the role of diverse religions within society and therefore of general importance beyond the successor states of former Yugoslavia.” (Asbjørn Eide, Professor Emeritus, Former Director of the Norwegian Centre for Human Rights, former Chairman of the United Nation’s Working Group on Minorities)

“The projected book offers vivid insights into the specific policies of religious education in schools…it treats the complex context and deals with aspects such as the general situation of religion in the different countries, the social position of churches, gender issues, reconciliation after the Yugoslav wars, and EU integration. With its qualitative and quantitative approaches, it is a methodological innovative study… Alas, this is not a common knowledge in the more secular “West”…the project brings about new questions and new answers in a skilful manner... Generally, each chapter offers an innovative potential… The chapters are solid research studies written as state of the art…this third title distinguishes itself by a new focus, namely on the sensible area of education in its broader context, and as such deserves attention” (Katrin Boeckh, Institute for East and Southeast European Studies, University of Regensburg, Germany)

“Religion has been identified as a key factor in the processes of transitional justice and reconciliation among Yugoslav successor states, especially given its role in identity formation and nation (re)building. This timely volume considers the educational changes across the region and offers valuable insights into the ways public schools have become not only the sites of religious instruction but also spaces for sowing the seeds of divisive identity politics. The combination of qualitative and quantitative approaches enriches the volume's assessment of specific social and political conditions that have allowed such religious grip over school curricula and exposes the ways in which religions act as accomplices to political interests rather than serve the educational benefits of children.” (Amila Buturovic, Professor of Religious Studies and Humanities, York University, Canada)

“A comprehensive set of ethnographic, comparative pedagogical studies of religious education in most of the Yugoslav successor states (Slovenia, Bosnia-Herzegovina, Croatia, and Serbia). These extraordinary essays not only present how religious education in public schools had to be reconstructed following radical political change but are instructive for European and other societies engaged with the new realities of multi-religious environments.” (Kurt Anders Richards, Professor of Theology, Abraham Centre, University of Dallas, USA)