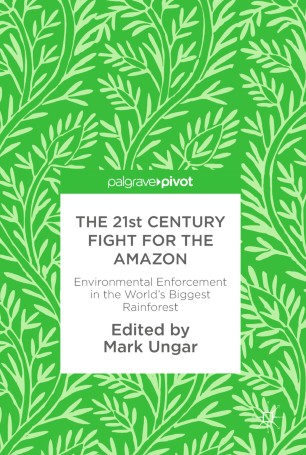 The 21st Century Fight for the Amazon

Mark Ungar is Professor of Political Science at Brooklyn College and the Graduate Center of the City University of New York, USA. He is author of four books and 30 publications and is a security sector advisor for the United Nations and Inter-American Development Bank. He has received fellowships from the Woodrow Wilson Center and the Ford, Tinker, and Henkel Foundations.
This book is the most updated and comprehensive look at efforts to protect the Amazon, home to half of the world’s remaining tropical forests. In the past five years, the Basin’s countries have become the cutting edge of environmental enforcement through formation of constitutional protections, military operations, stringent laws, police forces, judicial procedures and societal efforts that together break through barriers that have long restrained decisive action. Even such advances, though, struggle to curb devastation by oil extraction, mining, logging, dams, pollution, and other forms of ecocide. In every country, environmental protection is crippled by politics, bureaucracy, unclear laws, untrained officials, small budgets, regional rivalries, inter-ministerial competition, collusion with criminals, and the global demand for oils and minerals. Countries are better at creating environmental agencies, that is, than making sure that they work. This book explains why, with country studies written by those on the front lines—from national enforcement directors to biologists and activists.