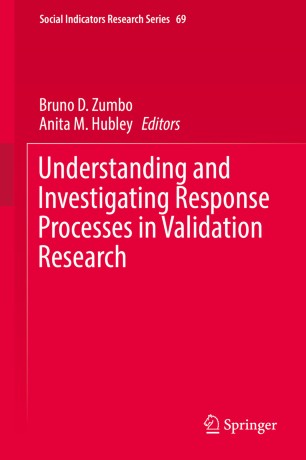 This volume addresses an urgent need across multiple disciplines to broaden our understanding and use of response processes evidence of test validity. It builds on the themes and findings of the volume Validity and Validation in Social, Behavioral, and Health Sciences (Zumbo & Chan, 2014), with a focus on measurement validity evidence based on response processes. Approximately 1000 studies are published each year examining the validity of inferences made from tests and measures in the social, behavioural, and health sciences. The widely accepted Standards for Educational and Psychological Testing (1999, 2014) present five sources of evidence for validity: content-related, response processes, internal structure, relationships with other variables, and consequences of testing. Many studies focus on internal structure and relationships with other variables sources of evidence, which have a long history in validation research, known methodologies, and numerous exemplars in the literature. Far less is understood by test users and researchers conducting validation work about how to think about and apply new and emerging sources of validity evidence. This groundbreaking volume is the first to present conceptual models of response processes, methodological issues that arise in gathering response processes evidence, as well as applications and exemplars for providing response processes evidence in validation work.