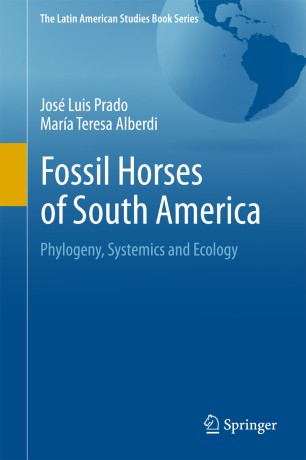 This book provides an update on the phylogeny, systematics and ecology of horses in South America based on data provided over the past three decades. The contemporary South American mammalian communities were shaped by the emergence of the Isthmus of Panama and by the profound climatic oscillations during the Pleistocene. Horses were a conspicuous group of immigrant mammals from North America that arrived in South America during the Pleistocene. This group is represented by 2 genera, Hippidion and Equus, which include small species (Hippidion devillei, H. saldiasi, E. andium and E. insulatus) and large forms (Equus neogeus and H. principale). Both groups arrived in South America via 2 different routes. One model designed to explain this migration indicates that the small forms used the Andes corridor, while larger horses used the eastern route and arrived through some coastal areas. Molecular dating (ancient DNA) suggests that the South American horses separated from the North American taxa (caballines and the New World stilt-legged horse) after 3.6 - 3.2 Ma, consistent with the final formation of the Panamanian Isthmus. Recent studies of stable isotopes in these horses indicate an extensive range of 13C values cover closed woodlands to C4 grasslands. This plasticity agrees with the hypothesis that generalist species and open biome specialist species from North America indicate a positive migration through South America.