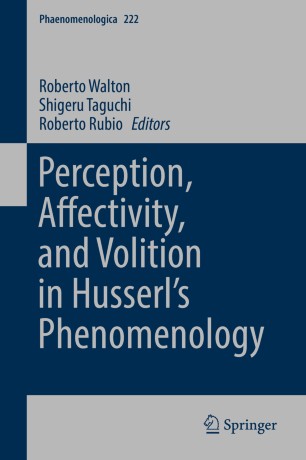 This collection of essays by scholars from Europe, Asia, North America, and Latin America offers new perspectives of the phenomenological investigation of experiential life on the basis of Husserl’s phenomenology. Not only well-known works of Husserl are interpreted from new angles, but also the latest volumes of the Husserliana are closely examined. In a variety of ways, the contributors explore the emergence of reason in experience that is disclosed in the very regions that are traditionally considered to be “irrational” or “pre-rational.” The leading idea of such explorations is Husserl’s view that perception, affectivity, and volition are regarded as the three aspects of reason. Without affectivity, which is supposedly irrational, no rationality can be established in the spheres of representation and volition, whereas volitional and representational acts consistently structure the process of affective experience. In such a framework, it is also shown that theoretical and practical reason are inseparably intertwined. Thus, the papers collected here can be regarded as a collaborative phenomenological investigation into the entanglement and mutual dependency of the supposedly “rational” and the “irrational” as well as that of the “practical” and the “theoretical.”