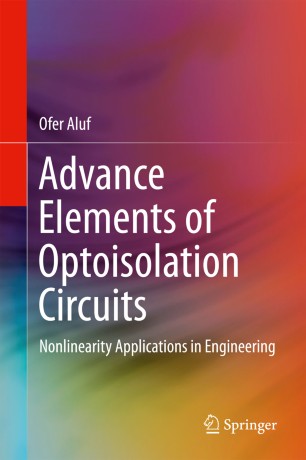 Floquet theory helps as to analyze advance optoisolation systems. Floquet theory is the study of the stability of linear periodic systems in continuous time. Another way to describe Floquet theory, it is the study of linear systems of differential equations with periodic coefficients. The optoisolation system displays a rich variety of dynamical behaviors including simple oscillations, quasi-periodicity, bi-stability between periodic states, complex periodic oscillations (including the mixed-mode type), and chaos. The route to chaos in this optoisolation system involves a torus attractor which becomes destabilized and breaks up into a fractal object, a strange attractor.

The book is unique in its emphasis on practical and innovative engineering applications. These include optocouplers in a variety of topological structures, passive components, conservative elements, dissipative elements, active devices, etc. In each chapter, the concept is developed from the basic assumptions up to the final engineering outcomes. The scientific background is explained at basic and advanced levels and closely integrated with mathematical theory. The book is primarily intended for newcomers to linear and nonlinear dynamics and advanced optoisolation circuits, as well as electrical and electronic engineers, students and researchers in physics who read the first book “Optoisolation Circuits Nonlinearity Applications in Engineering”. It is ideally suited for engineers who have had no formal instruction in nonlinear dynamics, but who now desire to bridge the gap between innovative optoisolation circuits and advanced mathematical analysis methods.

Ofer Aluf is a graduate of Ben-Gurion University (Israel), and holds a BSc degree in Electrical Engineering and an MSc in Physics. He has many years of experience on the high tech market in the following areas: system and integration engineering; application and support; wafers testing; chip design; RF and microwave systems verification; and semiconductors. His specialties include: circuits and systems; RF and microwave systems; RF and microwave antennas – design, simulation and analysis; RFID systems – design and simulation; electro-optics; non-linear dynamics; optical and electro-optical systems; RF/RFIC circuits – simulation and analysis; and biological systems analysis. He has published numerous refereed papers in professional and IEEE journals.