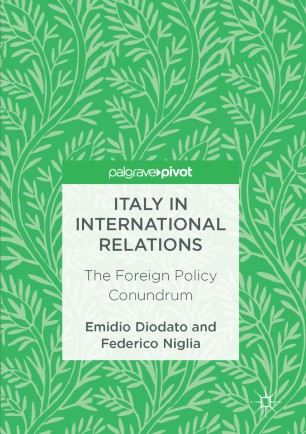 This book will become a compulsory reading for all those scholars and students that are open to reconsider the Italian foreign policy in a new, original and interdisciplinary way to better understand the great relevance of it from both an Italian perspective and a European one.

Italy's role in the world has often perplexed external onlookers. Whilst being a deeply European, indeed federalist, country, firmly wedded to the "West", Italy has at times adopted positions and policies that apparently diverged from mainstream European and Western approaches. Combining depth with breadth, Diodato and Niglia masterfully unpack this conundrum, explaining the peculiarities of Italian foreign policy by dissecting three defining moments in the country's historical trajectory.

Italy is often portrayed as a contradictory country. This book aims to provide an overview of Italian foreign policy from the moment of unification to the establishment of the European Union. Three turning points are crucial in order to clarify Italy’s foreign policy: 1861, the proclamation of the Italian Kingdom; 1943, when Italy surrendered in World War II; 1992, the signing of the Maastricht Treaty. The international position of Italy continues to be an enigma for many observers and this fuels misinterpretations and prejudices. This book argues that Italy is different but not divergent from other European countries. Italian elites have traditionally seen foreign policy as an instrument to secure the state and import models for development. Italy can still contribute to international security and the strengthening of the EU. At the same time, Italy is not a pure adaptive country and has always maintained a critical attitude towards the international system in which it is incorporated.