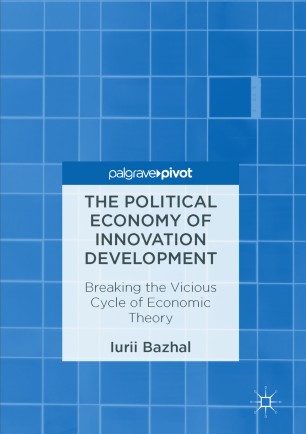 The Political Economy of Innovation Development

This book  finds that the R&D and technological innovation of a country is not a result, but a factor, of sustained economic growth. Bazhal develops Schumpeter's theory to argue that genuine economic growth - especially in transitioning and developing countries - is only possible with innovation. With a particular focus on the work of Ukrainian economists, Tugan-Batanobvsky and Vernadsky, the text seeks to move the discipline forward and explain why innovation has become a primary factor of economic development in recent decades and why its role will become even more dominant in the future.
Chapters interrogate whether modern economic theory can explain how we ensure the effective functioning of the market economy. The book shows that explanations of economists and politicians regarding the nature of the current economic and financial crisis, and the causes of huge gaps in levels of wealth in market economies, demonstrates that there are not enough satisfactory answers to this question.

Iurii Bazhal is the Head of Economics at The National University of Kyiv-Mohyla Academy in the Ukraine. He is also an Academic of The Higher School Academy of Sciences of Ukraine and Academic-Correspondent Member of Ukrainian Academy of Technological Sciences.He has over 160 publications, including 14 individually and collectively written monographs and 5 textbooks, and has also published a number of scientific articles in Ukrainian and foreign scientific journals.