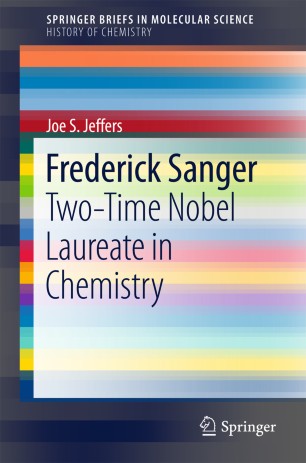 In this Brief, Joe Jeffers uncovers the life and works of two-time Nobel Laureate Frederick Sanger. Following Sanger’s early life to retirement, Jeffers describes how this celebrated British biochemist became the first person to determine the amino acid sequence of a protein for which he was awarded the Nobel Prize in 1958. Highlighting Sanger’s remarkable career, Jeffers describes Sanger’s later change in research direction to investigate deoxyribonucleic acids (DNA), work for which Sanger also received the Nobel Prize jointly with Paul Berg and Walter Gilbert in 1980. Joe Jeffers conducted twelve interviews with Sanger over the period of 1999-2009 and he has also spoken to more than 40 of Sanger’s colleagues and family members. This brief provides a rigorous yet concise view of Sanger on a personal and scientific level and is suitable for biochemists, historians or the interested layperson.