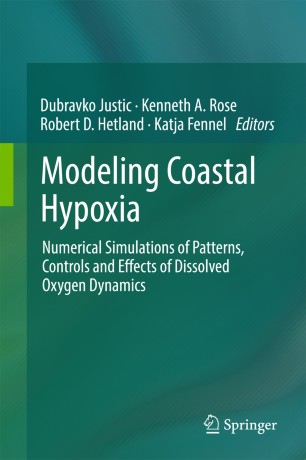 This book provides a snapshot of representative modeling analyses of coastal hypoxia and its effects. Hypoxia refers to conditions in the water column where dissolved oxygen falls below levels that can support most metazoan marine life (i.e., 2 mg O2 l-1). The number of hypoxic zones has been increasing at an exponential rate since the 1960s; there are currently more than 600 documented hypoxic zones in the estuarine and coastal waters worldwide. Hypoxia develops as a synergistic product of many physical and biological factors that affect the balance of dissolved oxygen in seawater, including temperature, solar radiation, wind, freshwater discharge, nutrient supply, and the production and decay of organic matter. A number of modeling approaches have been increasingly used in hypoxia research, along with the more traditional observational and experimental studies. Modeling is necessary because of rapidly changing coastal circulation and stratification patterns that affect hypoxia, the large spatial extent over which hypoxia develops, and limitations on our capabilities to directly measure hypoxia over large spatial and temporal scales. This book consists of 15 chapters that are broadly organized around three main topics: (1) Modeling of the physical controls on hypoxia, (2) Modeling of biogeochemical controls and feedbacks, and, (3) Modeling of the ecological effects of hypoxia. The final chapter is a synthesis chapter that draws generalities from the earlier chapters, highlights strengths and weaknesses of the current state-of-the-art modeling, and offers recommendations on future directions.