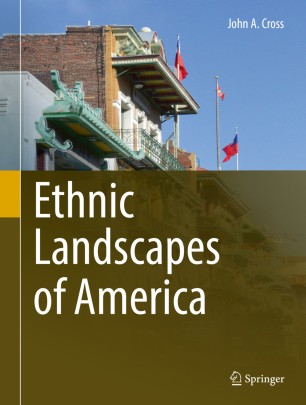 This volume provides a comprehensive catalog of how various ethnic groups in the United States of America have differently shaped their cultural landscape. Author John Cross links an overview of the spatial distributions of many of the ethnic populations of the United States with highly detailed discussions of specific local cultural landscapes associated with various ethnic groups. This book provides coverage of several ethnic groups that were omitted from previous literature, including Italian-Americans, Chinese-Americans, Japanese-Americans, and Arab-Americans, plus several smaller European ethnic populations.

The book is organized to provide an overview of each of the substantive ethnic landscapes in the United States. Between its introduction and conclusion, which looks towards the future, the chapters on the various ethnic landscapes are arranged roughly in chronological order, such that the timing of the earliest significant surviving landscape contribution determines the order the groups will be viewed.  Within each chapter the contemporary and historical spatial distribution of the ethnic groups are described, the historical geography of the group’s settlement is reviewed, and the salient aspects of material culture that characterize or distinguish the group’s ethnic landscape are discussed.

Ethnics Landscapes of America is designed for use in the classroom as a textbook or as a reader in a North American regional course or a cultural geography course. This volume also can function as a detailed summary reference that should be of interest to geographers, historians, ethnic scholars, other social scientists, and the educated public who wish to understand the visible elements of material culture that various ethnic populations have created on the landscape.