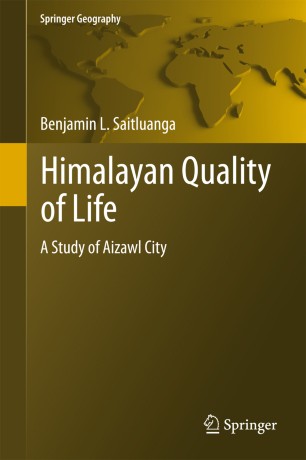 A Study of Aizawl City

The book is a study of intra-urban inequality in quality of life (QOL) in Aizawl city. The main objectives of the study include analysis of processes and patterns of social differentiation along the three-dimensional space of Aizawl city as well as analysis of spatial inequality in QOL at the lowest administrative structure of the city. An investigation into spatial pattern of residential differentiation was done at both horizontal and vertical spaces. Spatial variation in well-being of residents of Aizawl city and the quality of their immediate environment was also studied by taking both objective and subjective indicators. The study employed a number of descriptive, inferential and multivariate statistical techniques including correlation, factor analysis, principal component analysis, cluster analysis and spatial autocorrelation methods like Moran’s I and Local Indicators of Spatial Association (LISA). Mapping techniques and graphical methods like Choropleth map, histogram and line graph were also used.
With the help of factor analysis, the social space of Aizawl city was found to be differentiated along socio-economic status, family status, household size status, workers status and ethnic status. The most important factor determining residential differentiation was socio-economic status. Choropleth map of factor scores reveals that the inner city localities were dominated by high socio-economic class while poorer people dominated the peripheries. Non-local ethnic minorities were few but concentrated in some adjoining peripheral localities as well as in inner city localities which have been inhabited by their ancestors since the colonial period.
Vertical pattern of residential differentiation was also analyzed by taking income variable as a proxy of socio-economic status. Multi-storey buildings in Aizawl city were co-inhabited by both richer people and poorer people. The richer people were found at the top floors while the poorer people occupied the basement floors. Normally, the owners of the buildings were found at the top floors while the basement floors were dominated by the renters.
Spatial variation in QOL was measured with the help of principal component analysis as a weighting technique by taking variables pertaining to both objective and subjective QOL dimensions. The values of composite QOL index showed that the central localities have scored better than their peripheral counterparts. Correlation analysis of the relationship between objective indicators and subjective indicators provided a low positive value indicating the absence of relationship between the two dimensions of quality of life.
Spatial autocorrelation analysis was also performed to see the pattern of clustering of spatially weighted QOL variables across Local Councils. With the help of Global Moran’s I, spatial clusters and spatial outliers were observed for objective dimension of QOL within the study area. The value of Moran’s I was found to be insignificant for subjective QOL dimension indicating the absence of significant pattern of clustering. Spatial clusters and spatial outliers were shown with the help of LISA map.
The study also identified 7 social areas of Aizawl city on the basis of factor scores and composite scores of QOL variables calculated for all Local Councils. The identification of clusters was taken out with the help of hierarchical clustering method of cluster analysis. These clusters were labeled appropriate names and their characteristics were described in detail. The thesis concluded with recommendation of designating these social areas as ‘social development planning zones’ for obtaining inclusive development.