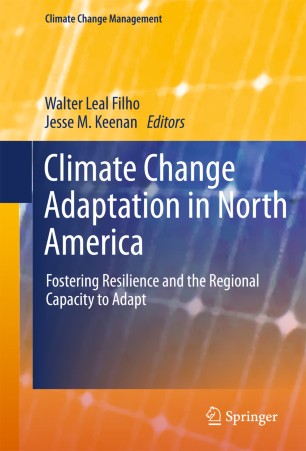 Fostering Resilience and the Regional Capacity to Adapt

This edited book responds to the need for a better understanding of how climate change affects North America and for the identification of processes, methods and tools which may help countries and communities to develop an adaptive capacity. It showcases successful examples of how to manage the social, economic and political complexities posed by climate change, so that lessons can be learned and best practices may be disseminated. A focus is on “fostering resilience and the regional capacity to adapt,” meaning that experiences from research, field projects and best practices in climate change adaptation and resilience among countries in the region are presented which may help advance the integration of climate science into socio-economic policies in the public and private sectors.

Professor Walter Leal (BSc, PhD, DSc, DPhil, DL, DLitt, DEd) is a Senior Professor and Head of the Research and Transfer Centre "Applications of Life Sciences" at the Hamburg University of Applied Sciences in Germany and at Manchester Metropolitan University. He has in excess of 250 publications to his credit, among which ground-breaking books such as "Handbook of Climate Change Management" and others. He teaches on information, education, communication on climate change at various European universities. He has over 20 years of research experience and has a particular interest on the connections between climate and human behavior.
Professor Jesse M. Keenan (A.B., M.Sc., Ph.D., J.D., LL.M., A.M., ASCE) is a member of the faculty of the Graduate School of Design at Harvard University where he teaches courses and conducts research in resilience and adaptation science. Keenan has served as Vice-Chair of the U.S. Community Resilience Panel for Building and Infrastructure Systems under two White House administrations and as Editor of the Built Environment at climate.gov. Keenan has conducted climate adaptation research with various cities around the globe including Amsterdam, Boston, Miami, New York City (NYC), Rotterdam, Sao Paulo, Rio de Janeiro, Stockholm and Tokyo. Keenan's many publications include, "Blue Dunes: Climate Change By Design."