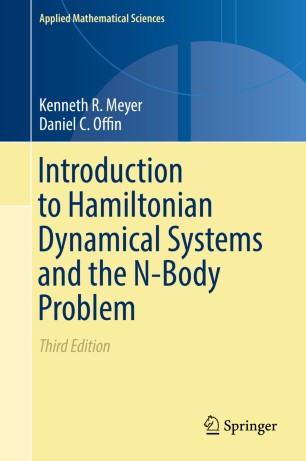 Introduction to Hamiltonian Dynamical Systems and the N-Body Problem

This third edition text provides expanded material on the restricted three body problem and celestial mechanics.  With each chapter containing new content, readers are provided with new material on reduction, orbifolds, and the regularization of the Kepler problem, all of which are provided with applications.

The previous editions grew out of graduate level courses in mathematics, engineering, and physics given at several different universities.  The courses took students who had some background in differential equations and lead them through a systematic grounding in the theory of Hamiltonian mechanics from a dynamical systems point of view.

This text provides a mathematical structure of celestial mechanics ideal for beginners, and will be useful to graduate students and researchers alike.

Reviews of the second edition:

"The primary subject here is the basic theory of Hamiltonian differential equations studied from the perspective of differential dynamical systems. The N-body problem is used as the primary example of a Hamiltonian system, a touchstone for the theory as the authors develop it. This book is intended to support a first course at the graduate level for mathematics and engineering students. … It is a well-organized and accessible introduction to the subject … . This is an attractive book … ." (William J. Satzer, The Mathematical Association of America, March, 2009)

“The second edition of this text infuses new mathematical substance and relevance into an already modern classic … and is sure to excite future generations of readers. … This outstanding book can be used not only as an introductory course at the graduate level in mathematics, but also as course material for engineering graduate students. … it is an elegant and invaluable reference for mathematicians and scientists with an interest in classical and celestial mechanics, astrodynamics, physics, biology, and related fields.” (Marian Gidea, Mathematical Reviews, Issue 2010 d)