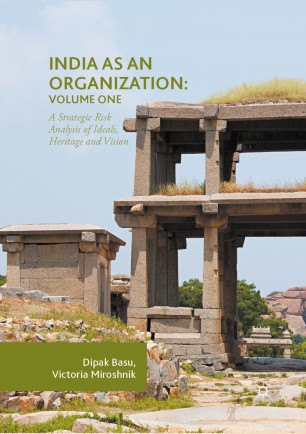 India as an Organization: Volume One

A Strategic Risk Analysis of Ideals, Heritage and Vision

This book, the first of two volumes, considers that India must first be looked at as an organization in order to properly understand its present day situation. Chapters consider the political and philosophical foundations of the development of the economy of India, what went wrong and what can be done to rectify it. It’s vast scope challenges existing ideas about the country from the fields of economics, history and political science by offering a wholly new paradigm for understanding India’s past and present.

Volume one embarks on a detailed analysis of India’s culture from an historical perspective. Chapters cover an immense scope of time and sources, from the origins of the Aryans in India to the ‘hostile takeover’ of India by Arabs, Turks, Mongols and British. The authors consider the effects of these occupations on India’s culture and structure. Using a vast temporal framework and equally impressive trove of sources – some only recently translated and never before published in English – this volume concludes by examining key pints in India’s history where its immense culture came close to collapse.

Dipak Basu is currently Emeritus Professor in Nagasaki University and professor in Finance in Tohoku University Graduate School in Tsuruoka, Japan. Previously he was Lecturer at the Institute of Agricultural Economics of Oxford University, Research Officer in the Department of Applied Economics of Cambridge University, Senior Economist in charge of the Middle East & Africa division of Standard & Poor, and Senior Economist in the Ministry of Foreign Affairs of Saudi Arabia. He was awarded Honorary Doctorate from Nagasaki University. He has received his PhD from the University of Birmingham.