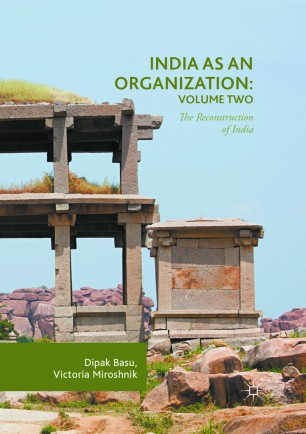 India as an Organization: Volume Two

The Reconstruction of India

This book, the second of two volumes, continues the authors’ ground-breaking re-examination of India’s history and political economy. Using the novel perspective of analysing India as an organization, volume two closely considers the country’s fortunes in the twentieth century and how the country’s history and political economy have been brought to bear on its functioning. This volume describes the economic fortunes of India in the second half of the 20th century. Beginning with the reconstruction of the Planning Commission and India's hybrid model of economic planning, the authors describe the multiple shocks weathered by the system before being replaced with a fully free market model after the collapse of the Soviet Union.

Chapters consider the stresses placed on India’s organisation by the shocks of the twentieth century, from its experiments with a socialist economy to its embrace of the Washington consensus in the 1980s. The impact of the invasion of China in 1962 and India’s struggle to find its feet post-partition are also given detailed analysis. The book’s unique perspective helps to shed light, for the first time, on how India’s organisational structure negotiated the country’s immense historical and cultural inheritance with the stresses of a twentieth century nation state. The authors consider what lessons can be drawn from India's successes and failures at aligning its goals and organisations with its heritage and mission