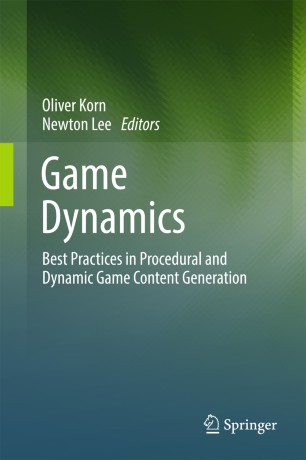 This book offers a compendium of best practices in game dynamics. It covers a wide range of dynamic game elements ranging from player behavior over artificial intelligence to procedural content generation. Such dynamics make virtual worlds more lively and realistic and they also create the potential for moments of amazement and surprise. In many cases, game dynamics are driven by a combination of random seeds, player records and procedural algorithms. Games can even incorporate the player’s real-world behavior to create dynamic responses. The best practices illustrate how dynamic elements improve the user experience and increase the replay value.
The book draws upon interdisciplinary approaches; researchers and practitioners from Game Studies, Computer Science, Human-Computer Interaction, Psychology and other disciplines will find this book to be an exceptional resource of both creative inspiration and hands-on process knowledge.

Oliver Korn is a full professor for Human Computer Interaction (HCI) at Offenburg University in Germany. He also is a certified project manager (German Chamber of Commerce, DIHK), professional member of the ACM and the IEEE and an evaluator for the European Commission.
After completing his master focusing on Computational Linguistics, he worked at the Fraunhofer Institute for Industrial Engineering (IAO) and the Stuttgart Media University (HdM). He focused on HCI, especially simulations, gaming and gamification. In 2003, he co-founded KORION, a Fraunhofer spin-off developing simulations and games. As CEO, he was in charge of several national research projects and gained experience in countless industrial software development projects, both in the area of entertainment and business intelligence. In 2014, he received his PhD in computer science at the SimTech Excellence Cluster of the University of Stuttgart. His research is published in numerous international publications.
Newton Lee is CEO of Newton Lee Laboratories LLC, president of the Institute for Education, Research, and Scholarships (IFERS), adjunct professor at Woodbury University School of Media, Culture & Design (MCD), editor-in-chief of Association for Computing Machinery (ACM) Computers in Entertainment, and education and media advisor for the United States Transhumanist Party.
Previously, Lee was a computer scientist at AT&T Bell Laboratories, research staff member at the Institute for Defense Analyses, and senior producer and engineer at The Walt Disney Company where he led the in-house Games Group in developing over 100 online games for Disney.com and DisneyBlast.com. He was the founder of Disney Online Technology Forum, creator of Bell Labs’ first-ever commercial AI tool, and inventor of the world’s first annotated multimedia OPAC for the U.S. National Agricultural Library.
Lee graduated Summa Cum Laude from Virginia Tech with a B.S. and M.S. degree in Computer Science, and he earned a perfect GPA from Vincennes University with an A.S. degree in Electrical Engineering and an honorary doctorate in Computer Science. He has been honored with a Michigan Leading Edge Technologies Award, two community development awards from the California Junior Chamber of Commerce, and four volunteer project leadership awards from The Walt Disney Company.