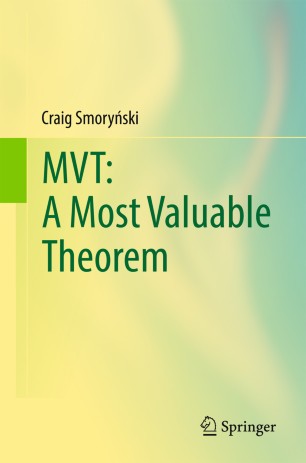 MVT: A Most Valuable Theorem

This book is about the rise and supposed fall of the mean value theorem. It discusses the evolution of the theorem and the concepts behind it, how the theorem relates to other fundamental results in calculus, and modern re-evaluations of its role in the standard calculus course.

The mean value theorem is one of the central results of calculus. It was called “the fundamental theorem of the differential calculus” because of its power to provide simple and rigorous proofs of basic results encountered in a first-year course in calculus. In mathematical terms, the book is a thorough treatment of this theorem and some related results in the field; in historical terms, it is not a history of calculus or mathematics, but a case study in both.

MVT: A Most Valuable Theorem is aimed at those who teach calculus, especially those setting out to do so for the first time. It is also accessible to anyone who has finished the first semester of the standard course in the subject and will be of interest to undergraduate mathematics majors as well as graduate students. Unlike other books, the present monograph treats the mathematical and historical aspects in equal measure, providing detailed and rigorous proofs of the mathematical results and even including original source material presenting the flavour of the history.