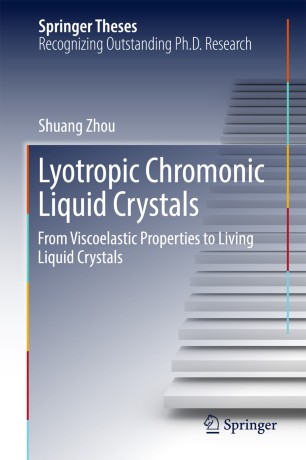 This thesis describes lyotropic chromonic liquid crystals (LCLCs) with exotic elastic and viscous properties. The first part of the thesis presents a thorough analysis of the elastic and viscous properties of LCLCs as functions of concentration, temperature and ionic contents, while the second part explores an active nematic system: living liquid crystals, which represent a combination of LCLC and living bacteria.
LCLCs are an emerging class of liquid crystals that have shown profound connections to biological systems in two aspects. First, the assembly process of the chromonic aggregates is essentially the same as DNA oligomers and other super-molecular assemblies of biological origin. LCLCs thus provide an excellent model system for studying physical properties such as the elasticity and viscosity of these supramolecular assemblies. Second, LCLCs are biocompatible, thus serving as a unique anisotropic matrix to interface with living systems such as bacteria.
This thesis deepens our understanding of both aspects. The noncovalent nature of chromonic aggregation produces the unique viscoelasticity to be found in LCLCs, which differs dramatically from that of traditional LCs. Anisotropic interactions between LCLCs and bacteria lead to fascinating phenomena such as the deformation of LCLCs with a characteristic wavelength determined by the elasticity of the LCLCs and the activity of the bacteria, orientationally controlled trajectories of bacteria and visualization of 24 nm flagella motion.