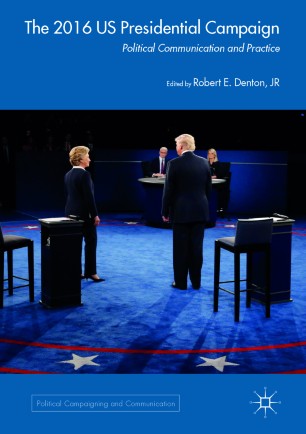 The 2016 US Presidential Campaign

Part of the Political Campaigning and Communication book series (PCC)

This volume focuses on the 2016 Presidential campaign from a communication perspective, with each chapter considering a specific area of political campaign communication and practice. The first section includes chapters on the early candidate nomination campaigns, the nominating conventions, the debates, political advertising and new media technologies. The second section provides studies of critical topics and issues of the campaign to include chapters on candidate persona, issues of gender, wedge issues and scandal. The final section provides an overview of the election with chapters focusing on explaining the vote and impact of new campaign finance laws and regulations in the 2016 election. All the contributors are accomplished scholars in their areas of analysis. Students, scholars and general readers will find the volume offers a comprehensive overview of the historic 2016 presidential campaign.

Robert E. Denton, Jr. holds the W. Thomas Rice Chair in the Pamplin College of Business and is Head of the Department of Communication at Virginia Tech University, USA. He is the author, co-author or editor of twenty-six books on the presidency and political campaigns, several in multiple editions. Recent volumes include Social Fragmentation and the Decline of American Democracy (with B. Voth, 2016) and Political Campaign Communication: Principles and Practices, 8th Edition (with J. Trent and R. Friedenberg, 2015).

“The latest volume in Robert E. Denton's quadrienniel works on presidential campaigns is a solid and worthy contribution to the literature on this subject. … students and scholars will find much of value in this volume.” (Eric M. Appleman, Democracy in Action, p2016.org, August, 2017)
Buy options