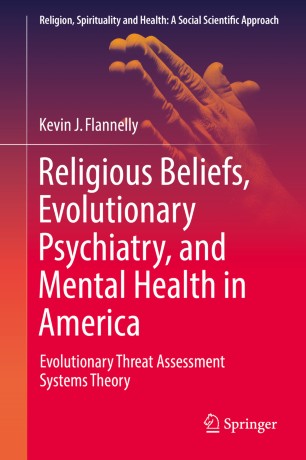 This book provides a new perspective on the association between religious beliefs and mental health. The book is divided into five parts, the first of which traces the development of theories of organic evolution in the cultural and religious context before Charles Darwin. Part II describes the major evolutionary theories that Darwin proposed in his three books on evolution, and the religious, sociological, and scientific reactions to his theories. Part III introduces the reader to the concept of evolutionary psychiatry. It discusses how different regions of the brain evolved over time, and explains that certain brain regions evolved to protect us from danger by assessing threats of harm in the environment, including other humans. Specifically, this part describes: how psychiatric symptoms that are commonly experienced by normal individuals during their everyday lives are the product of brain mechanisms that evolved to protect us from harm; the prevalence rate of psychiatric symptoms in the U.S. general population; how religious and other beliefs influence the brain mechanisms that underlie psychiatric symptoms; and the brain regions that are involved in different psychiatric disorders. Part IV presents the findings of U.S. studies demonstrating that positive beliefs about God and life-after-death, and belief in meaning-in-life and divine forgiveness have salutary associations with mental health, whereas negative beliefs about God and life-after-death, belief in the Devil and human evil, and doubts about one’s religious beliefs have pernicious associations with mental health. The last part of the book summarizes each section and recommends research on the brain mechanism underlying psychiatric symptoms, and the relationships among these brain mechanisms, religious beliefs, and mental health in the context of ETAS Theory.